Held in the midst of the 2009 edition of Montreal’s Mois de la photo, was Sophie Belair Clement’s exhibition Le son du projecteur. While not part of the official program, this imageless installation sat next to another officially sanctioned exhibition within the halls of Montreal’s Belgo building. Drawn to the back of Optica by the sound of low and hollow rumblings, and the familiar and unnervingly steady whistles of an audio piece by Adrian Piper, I found a configuration of empty walls dividing the space into two discrete areas. The first was darkened and contained two orange chairs and some audio equipment mounted high up, as if to accompany a projection. The second space was brightly lit, and contained only a single speaker, mounted at shoulder height, which was rounded, sculpturally present and almost erotic in its autonomy.

What Optica’s small back room contained was a cheeky attempt at restaging a fragment of the 2008 exhibition The Space Between, curated by Mats Stjernstedt, from the Museum Anna Nordlander (a small provincial Swedish museum with a very specific mandate of exhibiting modern and contemporary art concerned with feminism and gender identity). While I use the term “restaging” to imply the gesture of reconstruction, Belair Clement’s practice includes some major alterations and artistic licence.

The wall labels indicated that the audible “faceoff” in the gallery space was between Adrian Piper’s Bach Whistled (1970)–an audio work in which the artist whistles along to recordings of Bach’s concertos in D minor, A minor and C major–and Bas Jan Ader’s Nightfall (1971)–a silent film in which the artist struggles to lift a heavy block of stone above his head and then drops it on two lightbulbs on the floor, thus blacking out the film. Piper’s work was presented intact, but Jan Ader’s had been stripped of its image completely. Shifting my gaze away from the wall where Jan Ader’s fragile figure should have been to the high-mounted sound equipment, I realized that I was listening to the familiar hollow reverberations of the consumer-grade projector. This was not Bas Jan Ader’s work at all, but a faithful recreation of the sound that the projector makes when playing Jan Ader’s silent film. This new soundtrack had been created by Belair Clement after travelling to the museum in Skelleftea and recording the ambient noise created by Jan Ader’s work. Collaborating with the musical group Kingdom Shore, she then created an acoustic instrumentation of the droning, sunken and cold frequency emitted by the projector’s own functioning.

Is Belair Clement’s work an intentionally over-pastiched homage to her artistic fore-bearers? The thought brings me back to a review I wrote in [C.sub.99] of the Barbican Art Gallery’s Martian Museum of Terrestrial Art (2007), and also to my [C.sub.100] review of Sarah Pierce’s project for the Institute of Contemporary Arts (London) Naught to Sixty program (2008). The MMTA contained a large section dedicated to “Ancestor Worship and Kinship Diagrams”–fantastic examples of works created in devotion to other artists and their works, such as Eleanor Antin’s standout Blood of a Poet Box (1965-68). In Pierce’s case, she drew from the institutional memory of the ICA and played out archival reverberations, which resonated against her own personal artistic research. These are but two examples of the kind of feedback loops that are created in the sphere of contemporary art, where the artwork is anything but sovereign and instead relies on complex terrains of knowledge, understanding and past experience brought by the viewer into the exhibition space. The strength of Belair Clement’s project at Optica is that it draws attention to the fictive nature of exhibition memory and enacts the projective nature of memory by purposefully reconfiguring, editing and excluding major elements of the original work.

Belair Clement’s desire to replay or re-activate, on her own terms, this re-constructed fragment of an exhibition speaks of the power that exhibition-making holds. The ephemeral quality that exhibitions create is both a source of frustration and also something that offers extreme urgency. Even for those of us who are most adept at trolling through exhibitions, every so often we are engulfed by fascination and excitement when a grouping or pairing of works seems so perfect. But this also speaks of the moment when remembering an artwork and remembering the institution itself becomes inextricable. Here, we can understand Belair Clement as an artist, as a researcher, as a field recorder, as a composer and as a curator. This is not to go so far to say that the artist is enacting these roles in the terms of a forthright institutional critique. But, what institutional critique has offered to the artists who come after is an adoption of these institutional vocabularies as a ground for further problematization. 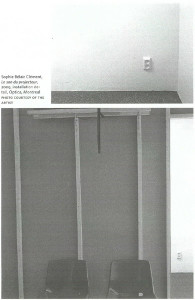 It is the sounds of this particular exhibition that trigger the most immediate memories for Belair Clement. Such a memory is almost irretrievable. But the artist’s tenacity in chasing down its audible elements is delivered with an eloquent and visceral desire. It is exciting to see the exhibition format reconfigured with a sense of play. The legendary Swiss curator Harald Szeemann understood exhibitions to be archives in transition. As a result of Belair Clement’s ingenuity, the exhibition The Space Between from the Museum Anna Nordlander will carry on and reach new audiences. Though partial and fragmentary, the recording of this short moment will exist beyond the walls of the small institution in northern Sweden, in Sophie Belair Clement’s own artistic archive.